Southern Clocks has failed dismally to turn a terrible clock into a fully functioning runner and striker, and learnt a lesson in the process. The clock had been bought by the customer sight unseen on a well-known online auction site. He had no knowledge or real interest in clocks. The purchase was made without our advice. When we received it, it was a good looking Lenzkirch ‘ting tang’, and well packed. However on unpacking it was clear that the entire clock, as well as the inside of the case, had been lathered with WD40, which is complete ‘no-no’ in the clock world…far, far too much oil in the wrong places. It soon gums up and stops the clock. However, freshly done it was of course ticking and striking and the seller was able, with a video, to prove that it was ‘fully operational’, so there was no way of obtaining a return and refund.

Once dismantled it was clear that the clock had catastrophic faults. There were three bent teeth on one of the barrels, so it obviously would not have worked for very long, but interestingly it also had a topped wheel on the strike side, so the teeth had been shortened to a square section; hence the WD40 of course; properly lubricated without WD40 the edges of the squared-off teeth would occasionally jam and stop the clock and strike.

This fault was combined with a damaged fly arbor and evidence of superglue attaching the fly; a horrid bodge by a previous owner to solve some unknown and undiagnosed running fault.

Reluctantly we took the decision that replacing the broken wheel and arbor would not necessarily make it a reliable striker, as we could not know the fault that had caused this bodged work to be done in the first place. The clock was repaired as timepiece only and very reliable it is proving too. The strike side has been gently wired to keep it from engaging, the click spring disconnected and a washer inserted over the square to stop it being wound. All of this is reversible if a future owner wants to invest the time and money into repairing it and getting it running as it should.

It still looks the part and keeps great time so we did the best we could. The lesson of course is never agree to take in a sight-unseen clock bought online which has no record of ever having worked properly. Our terms and conditions are being tweaked! 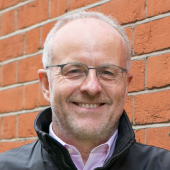